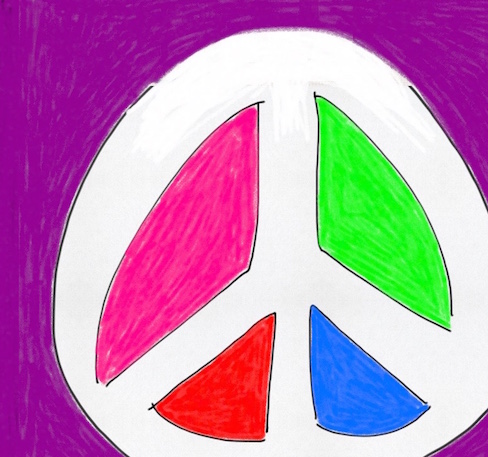 I was ten in 1968, an only child. None of my parents were activists. I was imbued with the spirit of the time but not a part of it. I am a child of the seventies. I grew up with duck and cover drills, crawling under our desks at school and covering our heads (as if this might actually help us in the quake of an atomic bomb). We grew up knowing Social Security may not be there when we reached 65, knowing the world could be destroyed anytime at the press of a button. Maybe it was in the face of this I became an eternal optimist, or maybe it was simply in my nature. But optimist or not, I have lived my whole life afraid that one day I would need to put myself in front of people with machine guns to stand up for what is right. And I didn’t want to have to die like that. In recent years, I’ve shaped a softer possibility for myself. Maybe I don’t have to die. Maybe I can speak up, do the right thing, without risking my life. But our current climate in the United States has awakened all my earlier fears. On the way home from my mother’s last week I met a woman named Liz. She and Zoë and I met at the Fullerton Amtrak station and shared the three seats at the back of the bus on the last leg of my journey. We talked nonstop for hours. Liz told me they threw grenades at the protesters in North Dakota. She said one woman had her arm blown off. She said another had one of her eyes put out by a rubber bullet. She said they used water hoses on the protesters in the heart of a northern winter. I have not researched this, but I’m inclined to believe her. Today between work needing to be done I Googled “Sacred Stone” and signed letters for my U.S. senators and my congressman to stop the pipeline. I called Palm Springs City Hall and left a message in hopes of finding out what I might be able to do to make sure we declare ourselves a sanctuary city. On the way home from Ralph’s before dark I start singing, “Give Peace a Chance.” I want to be able to stand up for what is right, but I don’t want to have to die for it. I’ve heard people are being “planted” to stir up trouble where the intention is to practice nonviolent resistance. The only thing I can think of in my head if I am there when this happens is to just start singing. So today I sing all the way home from the grocery store. It’s a warm evening. People look at me through the open windows of their cars. No one waves or gives me any indication of being with me, but it is my hope a happy sense of that comes to them moments later, after I pass by. When I walk through the trailer park, I imagine my song touching people through the open sliding glass doors. I know some people might think I’m crazy or even wrong. But I don’t stop. In between, I laugh. I am all welled up with the love of it. The waxing moon is rising in the east. It will be full here on Friday afternoon. I sing to the moon as I walk. And I get good chills along my arms, my legs. I am embarrassed and joyful, both. I wonder what my neighbors think as I get close to home. I hope some of the people who hear me, whether they know me or not, are touched by my heartfelt song. “All we are saying,” I sing, “is give peace a chance.”