I was thinking yesterday about Cinco de Mayo and how our country managed to use this relatively unimportant date in Mexican history to celebrate Mexican culture instead of choosing to honor a date that holds deeper meaning in Mexico, like el 16 de septiembre. It makes me sad, and it makes me embarrassed to be an estadounidense (someone from the United States). I have long been embarrassed by our reputation traveling abroad, for being demanding, arrogant, condescending, for expecting all our whims to be met and met instantly, for believing people in other countries should put aside their local traditions and customs in order to cater to and accommodate us. I was mortified when we elected Bush—twice!—and appalled when he refused to even pause when millions of people all over the world took to the streets to protest attacking Iraq. There may not be an adjective for what I feel now knowing Trump is the presumptive Republican candidate for president. When this started we were all so sure he’d be disregarded, dismissed. How could anyone take him seriously?

Now I am baffled and angry to see so many people voting for him. How can people ignore the malice and racism he’s so steeped in? I’m hideously ashamed of our country in the eyes the world, our dark, decaying underbelly exposed, maggots everywhere. I cling to one comfort that has come to me in recent times. I may be ashamed to be an estadounidense, but I am glad to be a Californian. I’m proud of the way our state has separated itself from the anti-immigrant stance. I’m not saying we don’t have more work to do, but at least we’re moving in the right direction, granting driver’s licenses, minimizing police cooperation with federal deportation officials, changing Medi-Cal laws to provide healthcare for the children of undocumented immigrants, raising the minimum wage. So, today I reach for solace in this gift, that I belong to a state who is trying to change things for the better. And I pray Trump will be defeated by an overwhelming and embarrassing margin. I pray come election day we’ll see evidence the true majority of people in this country understand what he espouses is wrong-hearted and vindictive, that at the end of this messy, ugly, humiliating spectacle the people of this country will do the right thing.

[Editor’s note: I don’t mean to imply here the United States doesn’t have much more egregious sins than these when it comes to our participation in the world or at home. This known catalog is endless and disturbing to say the least.]

A young man is standing at the bus stop when I arrive. “Do you speak Spanish?” he asks me. We end up talking on the bus together, trading off between English and Spanish, and we don’t stop until over an hour later when we reach my bus stop. It is such a joy. His name is Martín. He lives in Mexicali and is doing my planned trip in reverse, Greyhound from Mexicali to Indio, then our local buses. He is twenty-seven, and he is tall. It runs in his family, his town. From the Spaniards? We wonder out loud. His accent when he speaks English sounds more European than Mexican to me, and I wonder where his teacher was from. I think he may have more English than my Spanish, but he has no chance to practice. Would I be the only estadounidense there? The only gringa? He loves Mexicali, wants to spend the rest of his life there. I tell him I felt that way for the first time when I moved to Sonoma County. He lived in L.A. for a few months when he was fifteen. He was lonely, I think. He missed fútbol. 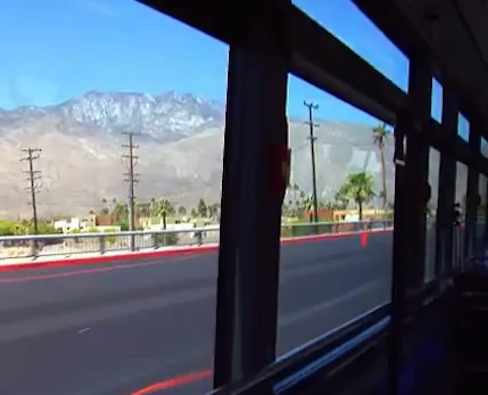 I tell him about the near miss I have just had outside the casino after my Kentucky Derby day with Auntie Christel, how the runaway car might have hit me, only seconds to separate me from its path, stopping on the corner to take stock. “Fue muy ‘creepy,'” I tell him. He gives me the Spanish word for it. Espeluznante? I tell him how grateful I am to be here, safe, alive. He tells me his own story, at a party the week before, moved to go home early only to find his mother lying on the floor. How grateful. We understand each other, the bigness of the events. He is young, I tell him, to be going through this with his mother’s illness. I was twenty-four when my stepfather died, Martín’s age when my father died. I think he knows I know. But there are differences. I hope his mother will get well, and when I needed to call 911, I bumbled, my adrenaline blocking my brain. But Martín became clear-headed and superhuman, scooping his heavy mother into his arms, getting her to the hospital. And he remembered all the details in the process, to bring the phone, grab her meds, lock the door. It was a huge victory for him, and so validating, I think, knowing he could do so well in an emergency. But later, like the time I pulled the big dog off my cat Trair and threw him across the yard, Martín was sore for days. We laugh. I feel glad for him, and proud, even as my heart breaks a little that he needs to go through this.

I ask him to tell me about Mexicali. He names a plaza, and somewhere else that is a good place to walk. I scribble them down on the envelope my horseracing money was in. I will hunt for them when I go, think of him. We don’t exchange phone numbers, and as soon as I am home I am sorry. I would have liked to visit him in Mexicali, meet his family. So now I fantasize his sister in Desert Hot Springs will find my blog, read about my Cinco de Mayo Martín, put us in touch. I am talking on the phone, telling my friend Janice about our meeting, about the sweetness of it, how glad we both were, how grateful. I realize in the telling how meeting Martín felt like a reunion. Maybe one day I will walk in the Plaza Calafia at dusk and find Martín and his mother sitting on a bench, and we will sit together and listen to the birds roosting in the trees. Maybe I will come upon his whole family, strolling one late fall afternoon in the Campos UABC, and Martín and I will have our second reunion. Ah, mucho gusto, Martín. Qué te vayas bien.